How I use my laptop for live music production

In just the past several decades, music production has moved from exclusively analog (magnetic tapes and mechanical devices) to being almost fully reliant upon digital technology (computers). So much music is produced today with the aid of computers that a generation has grown up knowing nothing else. 8-tracks and cassette tapes have been replaced by Pro Tools and hard drives. With computer speed and capacity increasing and size decreasing, musicians are turning from traditional instruments to laptops for convenience, portability, and reproducible sound quality.

A brief history of my musical life

My family had a console piano that I learned to play on growing up. The “nice” keyboards and synthesizers were not new technology but were still expensive. I had a Yamaha PSR-6 keyboard that opened up an entirely new realm of musical possibilities to me. With onboard rhythms and an assortment of various sounds, I began to write basic 4-chord songs that I thought were pretty good at the time.

I started experimenting seriously with computer-based music production in 1995 when I bought a Sound Blaster AWE32, a sound card for my PC that had several megabytes of onboard samples rather than sounds synthesized by an FM chip. With Cakewalk Professional on Windows 95 I wrote many songs, from basic piano pieces to techno with the emulated TR808 drumkit. I would always be looking for new MIDI files to download from the internet to see how well they sounded on my new Sound Blaster card.

In 2002 I purchased a Korg Triton Studio, a 76-key music production synthesizer. It was by far the best sounding keyboard I had ever owned. The Triton is still a top-notch keyboard today. But I ended up selling it several years later because of the advantages I saw in using software over a hardware solution.

While working for a large tech company in 2004, I purchased my first Mac laptop. It wasn’t until moving to Kansas City in late 2004 that I began to experiment with live production on a laptop. After purchasing Ableton Live and Propellerhead Reason in late 2004, I began to use it on stage for my sets for the versatility of its sound and portability of the entire rig (over a massive keyboard).

What do you use on stage for your sets today?

The hardware I am currently using is an Apple MacBook Pro with 4GB of RAM and an upgraded 7200 RPM hard drive. I’ve found that the 7200 RPM drive is very helpful in providing faster loading time of samples, especially when I have a lot of sound already playing back. I use a MOTU Ultralite firewire audio interface to connect the Mac to the sound system. I also have a Akai APC40 MIDI controller to control Ableton Live in realtime so I don’t have to use the Mac’s trackpad or a mouse to control instrument parameters.

I currently use Ableton Live 8 as my main DAW on stage. In addition to being suited specifically for live performance in looping and mixing audio clips, Live can host virtual instruments and has a plethora of effects and presets.

Each track is set up to use a specific instrument, and I load all of the instruments I commonly use in sets to be able to access them quickly. I’ll often add tracks or just replace an instrument on a track if I want something different that I haven’t already loaded. I’ll just use the track’s “arm” button to switch between instruments as I’m playing.

As you can see, I have many pre-recorded loops (that I make ahead of time) that I can recall at a moment’s notice depending upon where we go musically in our set. I’ve taken the “one large Live set” approach as opposed to “multiple small sets” simply because I can’t quit Live and load a new set in the middle of a spontaneous musical time.

Check out Ableton’s site for more information, tutorials, and tips for using Live.

An addon specifically bundled and constructed for Live, the EIC2 adds a great sounding, not-so-resource-intensive grand piano sample that I use extensively. I also use some of the EP and organ sounds from EIC2, but a majority of the sounds I use on sets come from the extremely powerful Spectrasonics Omnisphere.

Although I use more in the studio, Omnisphere is the backbone of the sonic possibilities with my live rig. From traditional pads, strings, and synth instruments to more exotic samples like ethnic instruments and voices. I don’t want to give an entire tutorial of Omnisphere here, but suffice it to say that it’s totally worth the money! 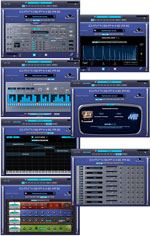 I also have many many custom made patches that make up my sound collection that I use often. I’ll let you try to figure those out yourself.

Quantum Leap Ra is a plugin that provides me with lots of ethnic instruments, from Middle Eastern strings to the Bongos, Bansuri, and Banjo. I’ll use these instruments sparingly so that when I do use them they really add a unique sound to the band.

I no longer use Reason as part of my live rig, but I figured it was worth mentioning. I used to run Reason rewired to Live, having a MIDI track for each instrument I wanted to play in the Reason rack, and one Audio track set to receive audio from Reason through rewire. The downside of this setup was that I had to map individual faders on my controller to Reason’s mixer, and I couldn’t control the volume of each instrument directly from Live without having a separate audio track for each corresponding MIDI track.

Here is a little video I made back in 2010 demonstrating the power of Ableton Live in a worship meeting with only a worship leader and myself.

If the video fails to display, you can view it here: http://www.youtube.com/watch?v=E2X2JA47dhc

Where can I buy the gear you have?

Laptop:
Apple MacBook Pro
Find the best laptop for you 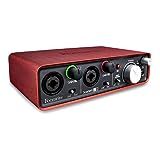 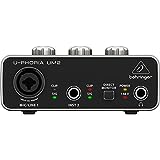 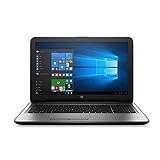 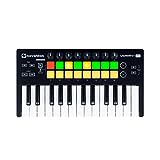 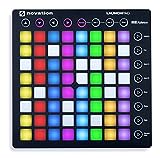 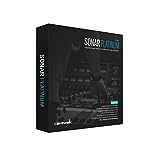 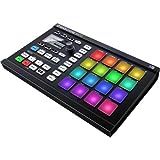 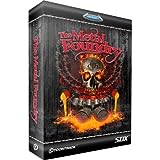 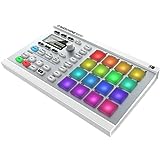 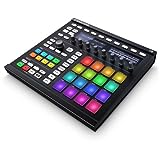 Here's just some of your questions I've answered over email... I'll keep pasting them here so that they're helpful to other readers!

How exactly are you connecting your devices together, and what cables do you use?

What keyboard stand do you use at IHOPKC? It seems to have hydraulics!

We use the "Freedom Breakdown Stand" from Solid Stand. It gives us the ability to raise and lower the stand with a simple foot pedal. Check out www.solidstand.com for more.

I want to sync my loops and recorded material with the drummer. Do you use the metronome in Ableton Live?

We use the metronome in Ableton on our sets, which of course doesn't cause any troubles with syncing! Since we all use in-ear monitors at IHOP, I use Live's metronome to run through a separate channel of my audio interface into the sound system. Everyone can hear the click if they want (and most people turn it up even just a little), but the drummer normally has it cranked so they can play in time with it. As long as the drummer stays in time, the rest of the band follows and all of my loops and recorded clips stay in time.

A couple of suggestions if it's helpful - sometimes I use eighth-note subdivisions on the Ableton click instead of quarter notes, which helps the drummer on slower tempos. And if you are really attached to your drummer's click, see if it has a MIDI output and can send MIDI clock. If so, you can sync Ableton's clock to the drummer's click that way.

Sometimes when the drummer taps in a click for a song, I'll turn and ask him what tempo it is. I'll just type that into Live and start the transport control on the drummer's "1", and sometimes adjust it a little bit if the loop is a tad off. But my loops and his click always seem to remain in tempo since they are counting at the same bpm...

How do I learn all these programs?

One of the best things to learn music production programs honestly is Youtube. So many people have put up tutorials on how to do things. Of course, the user manuals are always helpful (although not always fun to read, haha).

I have never paid for any books or training or anything for the programs I use, I just did a lot of reading and watching.

How do I get multiple MIDI tracks to work with Omnisphere?

You need to create some MIDI tracks that route their midi data to Omnisphere's tracks - set the output on the track to "1-Omnisphere", "2-Omnisphere", etc. You can also have individual audio tracks for each of the Omnisphere channels if you want, do the same thing in the I/O settings for those audio tracks and then change your Omnisphere outputs to "OUT A", "OUT B", "OUT C", etc.

When I use different instruments in the program, the sound comes out of my laptop not out of the speakers on my keyboard. Is yours like that as well? Or does the sound come out of your keyboard during the sets?

Also, when during a prayer room set. How do you have your loops have the same BPM as the music that is being played. Did you just get a feel for how you should set your BPM during the set? Or is there a way to measure it during the set?

Using instruments in Live will always send its audio through the output you've selected in Live's preferences, which is most likely always your computer's audio output. There's no easy way without another audio interface and some cables to route the instruments in Live back to your keyboard's speakers.

My interface is both a MIDI and audio interface, and I connect the audio outputs from the interface to the sound system. So I only use the keyboard as a controller. It never produces any sounds in and of itself.

And as for the loops being synced to the beat, I run Live's metronome through another output on my audio interface, and only the musicians hear the metronome. So we play along to that, and any loops that I start are automatically synced to Live's tempo and thus fit the beat perfectly.

What keyboard do you use as a MIDI controller?

Any one with a MIDI output works of course, but IHOP-KC uses the Yamaha CP-300.

Do you recommend an inexpensive MIDI interface?

I've used the Midisport UNO from M-Audio without any problems, and usually sells for about 40 USD here

I don’t have time to give you lessons on how to use all these programs over email, but I can try to answer any specific questions about my setup you may have. Just contact me.

If you've been blessed by Josh's music or by this page, consider donating to his ministry:

Check out the gear I use

Click these links for low prices on the same gear I have, or explore all of the other possibilities: