The Separation of Church and Faith: Copernicus and the Jews 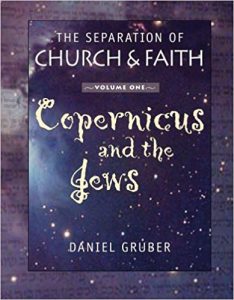 In the time of Nicholas Copernicus, the heavens and all that was in them revolved around the earth. This was not a belief that needed to be argued, it was simply an observable fact. People could see it with their own eyes. Scientists, mathematicians, and philosophers affirmed it. Religious doctrine did too. There was, however, one small problem. The planets, though insignificant in size, moved in continual defiance of the enshrined system. By challenging the system and finding the true center, Copernicus began a revolution that transformed life on earth. This book is about a similar conceptual error in the religious and political systems enshrined today. It proposes a different center, challenging the prevailing systems, but accurately explaining and predicting the data.